Time to Make the Doughnuts

A few weeks ago I found myself at an Amish farm in Michigan on a pleasant Saturday afternoon.  Ten of us women and girls (and one baby) had just spent a few hours garage-sale-shopping, while the men went out fishing on a nearby lake.  I was the English friend-and-driver.

Now it was time for the ladies to relax in the big kitchen while the kids played outside and the men fished…  Pretty soon lunch had been eaten, and one of the ladies (Ruth, the matriarch of the clan) started making doughnuts—a process I’d never seen before, except at a Krispy Kreme store.  Turns out it’s not that much different.

The basic ingredients are shown in this recipe, which has the unique twist of adding a cup of cold mashed potatoes!  (My friend used mashed potato flakes instead.)  A doughnut mix can be used to speed things up, adding sugar, yeast, and warm water. 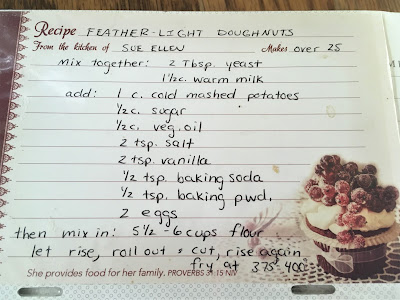 The dough was left in a bowl to rise while we had our lunch.  Then it was rolled out, and circles were cut with an upside-down glass.  A little heart cutter made the center holes, and some of the leftover pieces (what my mother-in-law would call “snibbles”) were saved, too.  They were given time to rise again. 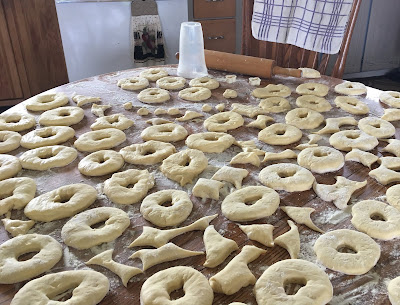 A few at a time, she dropped them into a pan of hot oil, flipped them over after a minute or two, and laid them on paper towels.  Five or six dozen doughnuts went in and out of the oil (plus the snibbles). 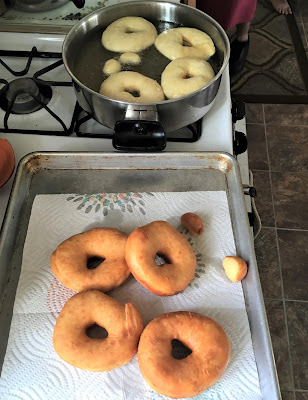 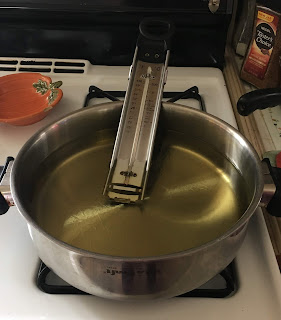 Meantime, one of Ruth’s daughters had been mixing up powdered sugar and water for the glaze.  Now she dipped them one or two at a time, letting the glaze drip off from a long fork (a trick she learned from her mother).  Not all of them made it into the glaze—I periodically swiped one from the assembly line! 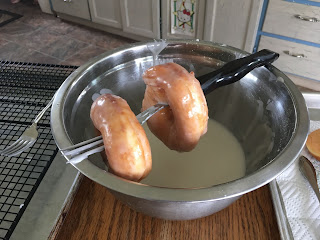 Now another daughter sprang into action, packing the cooled doughnuts into Tupperware containers (and four for me to take home to my doughnut-loving husband).  They were hot, fresh, and delicious.  And many hands made light work! 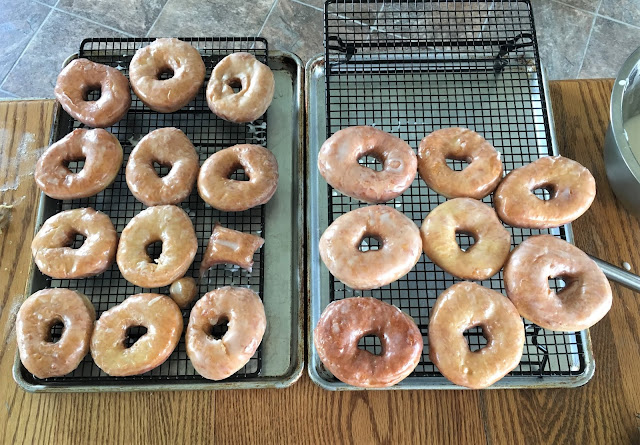 My genealogy blog:
Pages from the Ancestry Binders

I recently retired from being an administrator at an elder law firm in Aurora, IL. I also like doing genealogy for fun and profit. We always loved visiting Amish Indiana, so in June 2017, we moved here.